I nearly lost it recently. Have you been close to losing it? 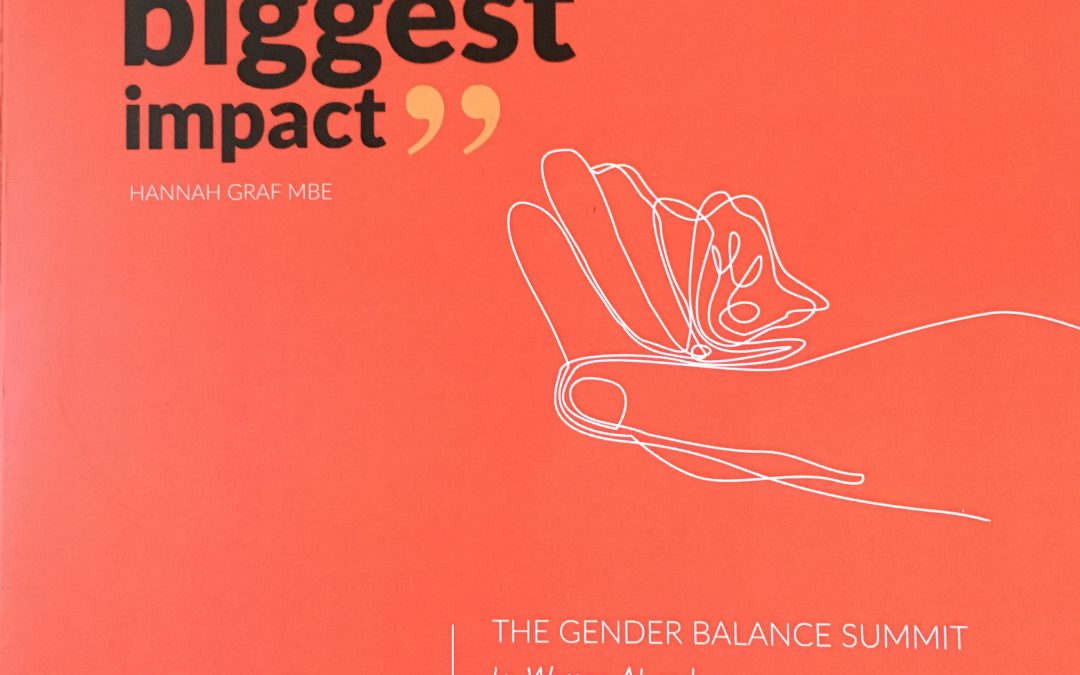 I attended the Gender Balance Summit at the Royal Institution in London yesterday, listening to many speakers give their view on addressing the inequalities in our society created by gender imbalance. #IWD2020 #WomenAhead

When it comes to gender issues and discussing the patriarchy, I’ve always looked on myself as a bit of an expert. I was born into a patriarchy (no sisters and 5 older brothers, yes, 5!) and then later gave birth to 4 daughters #BalancedView. In addition, I was a university student studying social anthropology during the 70’s just after Germaine Greer had written the Female Eunuch: her work was a constant source of intellectual discussion and debate around the injustices and oppression caused by male dominance in society. Although I was (and remain) a passionate and staunch advocate for gender equality, I didn’t want to be associated with the aggressive face of feminism as it was then. Over the years, I’ve tried to share my views and experiences in a calm and measured way. However, I have to confess I nearly lost it a couple of weeks ago…

I was in conversation with a male friend who I’ve known for a few years and it unravelled very quickly because, after a couple of minutes, I wanted to punch him in the face! His crass, insensitive, arrogant, unimaginative, ignorant, narrow-minded, bigoted perspective of a high-profile news story and his attitude towards the woman in the story infuriated me! Haha! You get that I was angry! You’ll be glad to know that I refrained from physical violence and remained silent and let him have his vitriolic five minutes. Only at that point was he ready or interested to hear my view and I told him how disappointed I was, that I’d regarded him as a well-educated, open-minded, intelligent man and clearly, I’d been mistaken. I said it with a smile on my face but he knew I meant every word.

A short silence followed (it felt very long!)and then I suggested that I’d be up for furthering the discussion in future if he was, when we’d both had time to reflect. He said yes and I’ll be seeing him again at a social event shortly, so I’ll update you on Round 2, if there is one! Even if he chickens out and we don’t discuss this again, I’m banking on the fact that you can’t un-hear something and that at the very least, I’ll have made him stop and think even a tiny bit about his limited view.

As the years have gone by, I’ve become disillusioned by the slow rate of change in society, but I have to take some responsibility for that, so I continue to speak up when I feel strongly. I’ve had to learn to control my anger and not make people wrong for not knowing what they don’t know, and as you now realise, I’m still a work in progress! There are times when I want to shred someone’s viewpoint, but how can they begin to understand what it’s like to be a woman in a man’s world if I don’t take the time to communicate that in a considered and respectful manner.

Back to the Gender Balance Summit: the theme for the summit day was “The small things we all do make the biggest impact.” I think the key word here is ‘all’. I can’t change the world single-handedly but I can bring about change in my world. I feel incumbent to share my view clearly in the hope it might open others’ minds to a different viewpoint. Who knows? If we all either climb out of apathy (thinking we can’t make a difference) or get better at controlling our anger in order to have these challenging conversations, this might make the biggest impact #bettertogether

I came away from the summit with a couple of insights and actions to take. Firstly I recognise that we women need to get better at recruiting men to be ‘modern’ feminists – empathetic, open-minded, intelligent men are our greatest allies and I need to hone my persuasive skills and get more of them on board! Gender balance is about sharing – the power and the responsibility. Also I’m re-committing to speaking out: after all, evil prevails when the good stay silent, doesn’t it? I owe it firstly to my daughters to speak out when I see injustice and imbalance, and then beyond them, to other women who have no advocates. Who do you owe it to, to speak out?

Lis runs self-awareness events: one for women (Vagina Dialogues) and one for men (Talking Bollocks)