The Lady with the Lamp? She’s back, she’s in East London 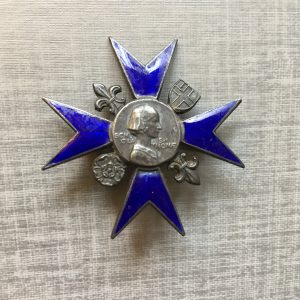 On 24th March, the government announced that the Excel Centre in London’s East End was going to be turned into a field hospital to cope with the patients affected by Covid-19. My initial reaction was shock, having been to the Excel centre for business expo’s and events: it was the first time I could contextualise the scale of resources needed and it gave me a sharp reality check. When I heard that the government had called the hospital the NHS Nightingale Hospital, I felt really emotional. And so the emotional C-19 roller-coaster continues.

So what is my emotional connection with the hospital, do I hear you ask? I qualified from the Nightingale School of Nursing, and was awarded my Nightingale Badge from one of the best teaching hospitals in the country, if not the world. OK, I’m sure you nurses who trained at other hospitals will argue the toss and it’s not a competition! But one thing you can’t argue with is the fact that Florence Nightingale founded the first school of nursing in the UK, at St Thomas’ Hospital, London. She set the standard. Boom!

Florence was a highly intelligent woman from a wealthy background who went against her parents’ wishes and trained to be a nurse in Germany. She responded to a government appeal for nurses to support the British Army field hospitals during the Crimean War (1854-1856): she was appointed Superintendent of the Female Nurses in the Hospitals in the East.

She revolutionised both nursing and the attitude of the (male) military doctors, who until that point, hadn’t valued the role of the nurse. She wanted to get to the bottom of the 42% death rate amongst the soldiers and she kept meticulous records. This lead to the realisation that poor sanitation and ventilation were key factors in the high death rate, and she implemented changes which had a significant impact on reducing the number of deaths.

What her statistics didn’t reveal was how much she and her nursing team cared for their patients and gave them every possible comfort they could in a war zone, both physically and emotionally. Apart from the changes in medical practice and sanitation, under her leadership the nurses set up food kitchens, washed linen and clothes, wrote home on behalf of the soldiers and introduced reading rooms. Wow! All this in the mid-19thC – talk about visionary.
And…. every night she toured the ward with her lamp, comforting and reassuring the soldiers. She cared, but it’s hard to quantify caring or use statistics to evaluate a caring attitude or its’ impact. However, by the time she returned to England she’d become famously known as the Lady with the Lamp, this moniker having been given to her by the wounded soldiers to whom she meant so much. If you’re interested in leadership, you’d be advised to read more about her: she was an amazing, revolutionary, forward-thinking woman, ahead of her time.

Back to Nightingale Badges. When we were training, one of the older, very senior nursing officers used to wear her Nightingale badge proudly pinned to her chest at non-uniform hospital functions. We young things didn’t understand what it meant to her and we sniggered, thinking how sad she looked!

All these years later, when I’d had my weep about the Nightingale Hospital being set up in London, I realised that the badge really meant something to me too. My name and date of qualification is engraved on the back, along with one word which has been a governing value all my adult life: LOYALTY. Courtesy of What’s App, I feel as connected to my Nightingale buddies right now as I did when we worked together. We’ve known each other for 43 years and remain loyal friends, knowing that we’re there for each other now, as much as we were there for each other on the wards back in the ‘70s. 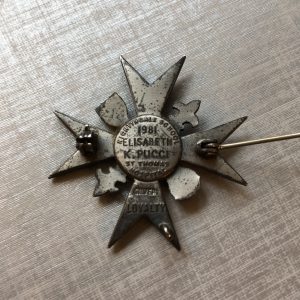 I’ve fished my badge out and probably for the first time, had a really good look at it. I had no idea of the rich history behind its’ Victorian design, but over and above the quality of loyalty, there are references to the four Cardinal virtues of prudence, temperance, justice and fortitude. I’m going to be up front, they’re not words I use in in my day to day vocab! So I’ve looked up their definition:
• Prudence ~ behaviour that is careful and avoids risks
• Temperance ~ control of your own behaviour such as not eating or drinking too much
• Justice ~ fairness in the way people are dealt with
• Fortitude ~ courage over a long period

We’re all going to have to change our behaviours and attitudes over the coming weeks and months, so I’ve decided to work on being more prudent and temperate! How about you? More loyal? More caring, towards yourself and others? If you need an example to follow, just watch the medical teams at the moment, showing huge loyalty, compassion and caring, both for their patients and their colleagues. An example to us all.

Instead of pinning my badge to my chest, I’ve got it sitting on my laptop – can’t have anyone thinking I’m a saddo! It’s become a great anchor for me during these turbulent times, its sits there, reminding me what I knew all along – money is very important but health, kindness and great relationships come tops. 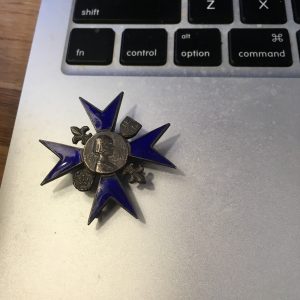 So glad you’re back in London, Florence – polish that lamp, we need you and your values more than ever right now.