Was she pushed or did she jump? 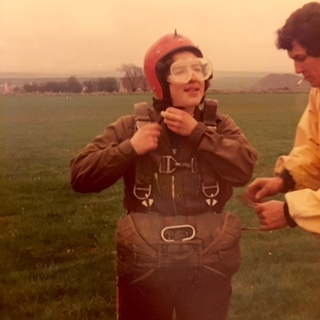 Was she pushed or did she jump?

Have you ever allowed yourself to be talked into something against your better judgement? Have you ever been pushed way out of your comfort zone?  If the answer’s yes, you’ll understand how, many years ago, I managed to allow both those things to happen and got myself into a tricky situation!   However, I lived to tell the tale and learned some extremely valuable life lessons as a result, which I’d like to share with you.

A friend asked me to do some parachute jumps with her – she was doing them for charity and needed some moral support, so muggins here said yes.  I was living in Scotland at the time and as you can see from the pics, it WAS a long time ago, in the days when it was rather unusual to be jumping out of aircraft  🙂

We received training from the airforce boys in nearby RAF Leuchars and amongst other things, we learned that the force we’d hit the ground with would be equivalent to jumping off a VERY high wall (I can’t recall exactly how high, it was a long time ago, but 10 feet seems to ring a bell?).  As I didn’t want to break my leg or damage myself irreversibly, I listened very carefully to the advice – knees together, bent, chin down, roll sideways – and then decided that I would practice landing and rolling in the privacy of my own home.  Needless to say, the sideboard was no substitute for a 10 ft brick wall and the neighbours in the flat below complained after only 5 mins of practice! 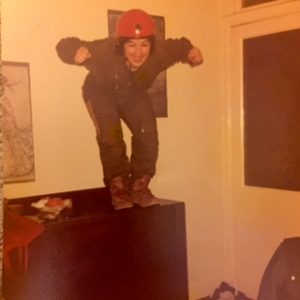 I’ve always been keen to take responsibility for my own well-being, especially when it might involve death! However, little did I know that although I’d practised landing as much as I could, nothing could prepare me for a much greater challenge on the day of the jumps (NB jumps plural – we did more than one.  Foolish. Very).

Suffice it to say that I don’t feel totally relaxed when jumping out of aircraft at 2,500k feet.  However, there is something quite magical about floating slowly down above the beautiful Scottish countryside and finding yourself flying higher than the birds.  An incredible experience, which obviously is still with me after all these years.

The sideboard practice paid off and I managed to land safely after two jumps.  Then, the sneaky RAF boys put the spanner in my works and said that for the third jump we had to fold and pack our own chutes.

Oh. My. God.  I’m sure you’ve already worked out the implications of doing it wrong.  If I’d known what was ahead, I wouldn’t have bothered with the sideboard.  I suppose I could’ve said ‘no’ to packing my chute, but I wasn’t very good at saying ‘no’ in those days, and in any case, I quite fancied the RAF instructor!  So, I paid attention and listened like I’ve never listened to anyone in my life before (or probably since). I packed my own chute and then jumped out of the aircraft AGAIN (Cessna Rocket for you aircraft geeks). Admittedly we were all kitted out with reserve chutes, but come on, brave or what?

So what insights did I gain/learn all those years ago which still stands me in good stead today?

Wishing you an exciting life just outside of your current comfort zone,
Lis x 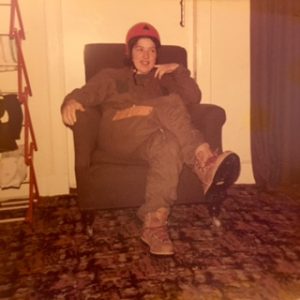